Our live broadcasts in chronological order:

Roma-LGBTQ + people, heterosexuals and non-Roma together for equality, diversity and freedom on July 8, 2017 at Budapest Pride. Join and come along with us!

If you believe in our common peaceful coexistence, then join the truck of Romaversitas Foundation, Tilos Radio and Laszlo Farkas Gypsyrobot at the 22nd Budapest Pride.

LGBTQ+-Roma in Hungary face multiple discrimination due to multiple identities such as ethnicity, gender and sexual orientation. It is an issue that has not been received sufficient attention in the society and media.

Our goals with the Roma-LGBTQ+ float are:

– to support Roma people, who are fighting with their identity as being ’different’. As a Roma, it can be harder to reach the self-acceptance because of the fear of unknown (lack of information about homosexuality) and by the prejudices they already bear.

– to empower them to accept their identity, or even to come out of the closet.

– raising awareness of Roma and non-Roma communities to the importance of acceptance vis-à-vis the LGBTQ+ community.

– to show that Roma and non-Roma can work together on issues like equality.

Everybody is welcome to join the float, independently from racial, sexual and other background! 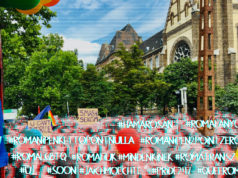 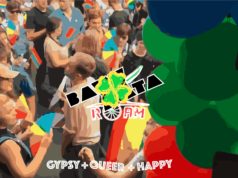 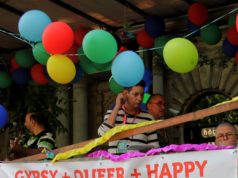